Wellness Tip of the Day: Do you expect to succeed? Are you certain in your heart? Doubt is the distance your mind must travel to be able to reach your goals.

How are those New Year’s Resolutions coming? Are you still plugging away or have they been put aside to show up on next year’s list?

One of the things that can cause people to pass on meeting their wellness goals is the overwhelming feeling that can come from trying to go from chip-eating coach potato to food-measuring athlete all at once.

There really is no rule that says you have to change all of your behaviors at once to succeed.

Three years ago, for various reasons I went from a runner to a walker to not doing any exercise at all. During that period of inactivity, I didn’t curb my eating and pretty quickly reached my heaviest weight ever.

I found myself starting over with exercise and losing weight—again. And it didn’t feel good. 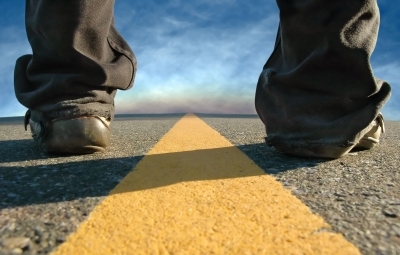 It actually took some mental preparation and the support of a friend to overcome the inertia to get out of bed and start exercising. At first, all I did was walk. I didn’t even look at my diet. I just focused on getting out of bed every morning and moving. That is what I counted and celebrated as success.

To begin, I set a minimum goal of 10 minutes a day, and then I went up to two hours a week. Slowly and steadily, I increased my exercise goals until I was back up to a fitness level that felt good. By then, I had only lost 5 pounds and I knew it was time to take on the eating.

And even that was a process of cutting back on portions and making better and better choices. Heck, I’m still looking for ways to eat cleaner and healthier. (If you had told me three years ago that I had to drink protein shakes with spinach in them, I would have quit in in horror. Now that’s something I want to do, but it was something I had to build up to.)

Yes, it took me a year to lose 34 pounds and get back into great shape. But at the end of that year I was a lot happier having slowly and steadily made those small decisions towards a healthier lifestyle than to try to do too much at once and give up, only to be faced with the same goal and results a year later.

What small decision can you make today that will move you towards a healthier lifestyle? Do that for a week and then look for another tiny step to make. Do that consistently and you will build momentum and achieve your goals. Do that consistently and next January 1 you will be celebrating your success rather than being faced with the daunting decision to start over once again.

Together we can do it!